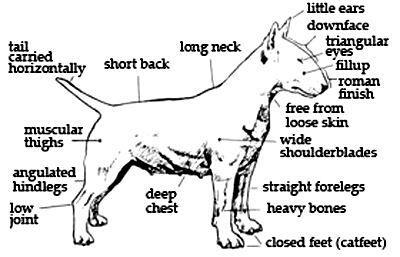 HISTORY   Today's Bull Terrier is the direct descendant of the original bull-and-terrier crosses made in England, it was believed that it was established by mating a Bulldog  to  the now extinct white English Terrier. Later  in order to gain size, it was crossed with the Spanish Pointer.  The purpose for which this breed was bred was for fighting ,although this breed hasnt been bred for this for over 100  years, a bull terrier must still be strong and muscular.  There is the standard version and the mini version of the bull terrier breed.  One might be better than the other for you, depending on your lifestyle.

GENERAL APPEARANCE--    The Bull Terrier should have a strong, solid built and muscular body, presenting a symmetrical appearance, with a determined and intelligent expression.The breed is very active, with a sweet disposition and is responsive to discipline .  The egg-shaped head, with tiny triangluar eyes are  features that separate this breed from any other breed.. Dogs should look masculine, and females should look feminine.


If you are interested in a Bull Terrier,,  we suggest that you read  books on the breed. Visit some kennels, talk to owners who have bull terriers,
Bull Terriers love to be with people,  always under foot , give them a bed, chair  and they will be up on it sitting or laying with you,
They are very clownish ,giving endless laughter with their  funny personality.  Lastly, Bull Terriers do what we call a "Bully Run"  They will for no reason at all, take off racing from one end of a room to the other end, running into anything that is in their way..Then within a few minutes, that is it!!! They are done!!! Quite Comical and YOU BEST  stay out of their way!!!
I  always suggests that my puppies/dogs are  enrolled in obedience classes. along with  lots of   socialization and  plenty of exercise. A Bull Terrier does not do well if it has to be crated all day long,
A tired puppy/dog  is a happy puppy/dog.


HEALTH-  Like in anyother breeds, the Bull Terrier  can have health issues,    Here are a few that have been in the breed,  heart problems, kidney disease, hereditary deafness,skin issues, patellas. When you are purchasing a puppy/dog,  the best thing to do, is ask the Breeder if there has been any health issues in the pedigree or if they have had any in their  Bull Terriers.